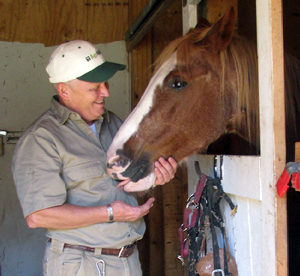 On February 20, 2012, Captain Michael Trost lay face-down on a street in Robat, Afghanistan, his right thumb now missing and his legs pierced with four bullets. The shooter was a rogue Afghan officer who Michael had helped train.

It has taken more than 25 surgeries to get Michael to where he is now, and his health problems aren’t over yet. However, after 32 years of military service, Michael has a new life away from the combat zone as a beginning farmer in East Tennessee. He and his wife Stephanie raise horses, donkeys, alpacas, chickens, vegetables, and hops. To help get him started, more than 100 volunteers, including other veterans, descended on their farmstead for an old-fashioned barn raising.

In 2016, Michael faced his latest battle: a below-the-knee amputation of his right leg, the result of repeated stress fractures, poor circulation, and an unsuccessful sciatic nerve transplant. However, doctors were able to use one of his toes to reconstruct his right thumb. As a reflection of his positive spirit, Michael said prior to the operation, “I’m not losing a leg, I’m gaining a thumb.”

Tennessee AgrAbility has been actively supporting Michael and his wife as they explore their new life in agriculture. They encouraged him to become a member of the Farmer Veteran Coalition and work to start a Tennessee chapter where they can be inspiring mentors to other veterans. As Stephanie says, “We are all here to serve.”

Click here for a great video on Michael from RFD TV