Carey Portell: Against the Odds 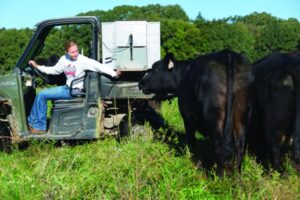 mber 2010, Carey Portell’slife shattered when a drunk driver collided head-on with her vehicle on Route 66, a few miles from her St. James, Missouri, home. She suffered a fractured pelvis, crushed right ankle and dislocated left foot. After undergoing two surgeries, Carey remembers waking up to hear her eight-year-old son saying, “Thank you for staying alive, Mom.” She says, “When I looked down, my legs were in external fixators. I knew it was bad, but I had no clue how long or how hard my recovery would be.” Limited to wheelchair use for almost two years, it was four years before Carey walked again without support. She had 10 subsequent operations, fusing the joints in her ankles and bones in her pelvis.

In 2014, Carey attended a University of Missouri conference for ag women where she met Karen Funkenbusch, Missouri AgrAbility director. Funkenbusch contacted the state Department of Vocational Rehabilitation (VR) and encouraged Carey to apply to become a client. With help from Missouri AgrAbility and VR, Carey received funding to buy a Polaris Ranger UTV with an automatic feeder attached. “The UTV keeps me from being bumped over by cows and from flying calf hooves,” she says. “I don’t have to walk on ground with frozen hoof prints. It’s the most essential piece of equipment I’ve received.” Other adaptations reduce Carey’s fatigue, including anti-vibration gloves and remote control pasture gates.