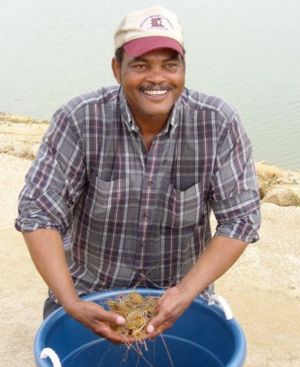 A number of factors moved Cedar Grove, North Carolina, farmer Joe Thompson out of tobacco production, including government pressure to produce other commodities. However, problems with his joints from years of hard work were also a major motivation. He had endured back impairments since 1987, undergone a hip replacement in 1995, and most recently had knee replacement surgery in 2016. Such issues also motivated him to seek help from North Carolina AgrAbility.

Joe’s choice to raise prawns (which are large shrimp-like crustaceans) was partly because it’s less physically demanding and partly because it’s “something that someone else wasn’t doing.” So he dug a nine-foot-deep, two-acre pond and filled it with 15,000 juvenile prawns. He also remodeled an old tobacco barn to use for storage and freezer space and even engineered his own portable icemaker for keeping harvested prawns fresh.

Joe’s entrepreneurial inclinations have paid off. He has expanded to multiple ponds, harvests several thousand pounds of prawns per year, and was awarded the 2010 Gilmer L. and Clara Y. Dudley Small Farmer of the Year Award from North Carolina A&T State University.