Kane Lewis: Following in The Footsteps of Family 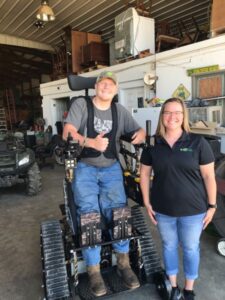 Kane Lewis is a fifth-generation Jamestown, Ohio, farmer. Like many other young people in agriculture, he’s working on a degree at the same time as he’s gaining experience and helping on the family’s corn and soybean farm.

Unlike other young farmers, he’s taking on an additional challenge. In 2019, Lewis was injured. “I was in the tree stand that morning, bow hunting,” he says. Everything seemed normal, but the next thing Lewis knew, he was lying on the ground below. Following surgery, he was told that he would be paralyzed from the waist down.

Thanks to help from AgrAbility and Ohio’s vocational rehabilitation program, Opportunities for Ohioans with Disabilities, Lewis began his journey. He applied for an Action Trackchair that allows him to stand upright, and his truck was retrofitted with a lift to get him into equipment. He learned about other helpful assistive technology.

Rachel Jarman, a rural rehabilitation coordinator with Ohio AgrAbility, works with Lewis. “Kane has been positive from the start,” she says. “He absolutely said ‘I want to do this.’ ”

Lewis admits, “Sometimes it’s hard. Getting out of bed and just pushing on. But you’re following in your family’s footsteps. Stuff might be hard, but it’s not impossible. I want my kids to think that I’m a strong, independent guy, and my main goal is that they’re going to take over the farm once I’m gone.”