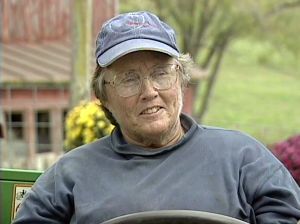 Mary began full-time dairy farming in the mid-1970s, soon after returning from college to her family’s Dunndale Swiss Farms in southwestern Wisconsin. However, the pains of arthritis soon followed. Anyone familiar with dairy operations knows that the work can entail significant amounts of stooping, bending, repetitive motion, standing on hard surfaces, and walking on rough terrain. Mary’s arthritis affected her feet, knees, back, hips, and shoulders and was so severe that doctors suggested she find a new job off the farm. However, Mary’s determination kept her working through the pain.

In 1994, she got a major boost to her farming future, thanks to Wisconsin AgrAbility. Through consultations with AgrAbility and assistance from the Wisconsin Division of Vocational Rehabilitation, she acquired essential assistive technologies to keep her in business. Among them were an electric feed cart, an automated feeding system, extended steps and handrails for her tractors, a tracked milking system, and a utility vehicle.

Still, Mary’s trials were not over. Continued arthritis pain led her to switch from dairy to beef cattle in 2010. Later, an infection resulted in the below-the-knee amputation of her right leg, and her left foot had to be fused to her leg at the ankle.

Despite these obstacles, Mary presses on in working her bull-calf operation. Her perseverance is a testimony to her love of farming, the significance of appropriate technology, and the value of AgrAbility’s ongoing assistance.

Below is video of Mary working with AgrAbility while she still had dairy cattle.