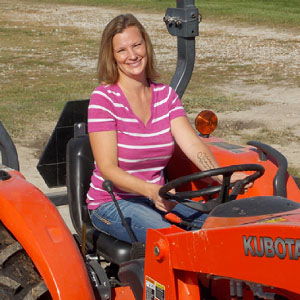 ed as a nurse in the Air Force from 2004-2006, including a deployment to Iraq in 2005-2006. After returning home to Florida, she struggled with PTSD, and in her words, “connecting with life again.” Sara discovered that raising vegetables was a healthy way to cope with her struggles. When her husband, who had been an Air Force pilot, was diagnosed with colon cancer, her gardening skills took on new value as they began focusing on a healthier diet.

After Sara’s husband passed away in 2011, one recurring thought was, “Go and farm.” Eventually, she purchased a farm in Indiana, where her sister lived, and started her agricultural enterprise with five chicks from a farm store. Soon, she was adding fruit trees and planting gardens. Today, her Blue Yonder Organic Farm boasts over a thousand chickens, turkeys, and ducks, plus a variety of fruits and vegetables. She has also worked with Indiana AgrAbility to improve her enterprise.

Sara relates, “I really found that getting my hands in the dirt and working with animals and seeing life come back again was just really healing and very, very powerful.” She also founded Operation Groundwork, a nonprofit dedicated to connecting other veterans with the power of agriculture to heal. “I think farming is a way to reconnect with something positive in yourself.  It’s a chance to plant that seed, hatch that egg, and see new life come out of that, and it provides healing and also an opportunity to really push outside yourself.”