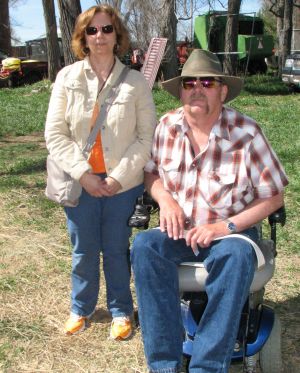 Michael, his wife Rebecca, and son Marcus raise wheat, milo, alfalfa, and soybeans, and they operate a cow-calf operation in Jewell, Kansas. However, Michael has multiple sclerosis (MS). He initially contacted Kansas AgrAbility when he began experiencing trouble depressing the clutch on his tractor because of weakness in his left leg. The program connected him with Kansas Rehabilitation Services to obtain funding for a hand clutch so he could continue operating his machinery. Later, when Bolte required assistance getting into his tractors and combine, Kansas AgrAbility helped by installing a power lift that reduced from three to one the number of steps he had to climb.

As his MS has progressed, Kansas AgrAbility has continued support Michael and his family. Most recently, they helped him acquire a boom lift mounted on a flatbed trailer. This chair lift allows Michael to sit while getting into multiple pieces of machinery, including several tractors, a combine, and a skid-steer loader.

As Michael’s needs have evolved, so have the services Kansas AgrAbility has provided. The result: Michael has been able to continue the farming life that he’s passionate about.

Michael, Rebecca, and Marcus on their farm talking about AgrAbility