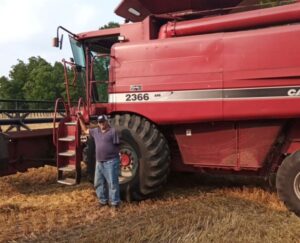 Alan Kaltenberg loves the land. But woven into the beauty of working the land is the danger. At 4 years old, he lost his arm in a corn auger. “I was the different kid growing up–the kid with one arm,” he says. “But I did anything I wanted to do.”

However, with age, the physical demands of farming exacted a toll.

“Farmers tend to be more prone to arthritis and repetitive motion injuries,” says Richard Straub, University of Wisconsin professor emeritus and co-director of AgrAbility of Wisconsin.

Paul Leverenz of Easterseals Wisconsin agreed. “Farmers don’t think about bad backs, bad hips, or milker’s knee as disabilities,” he said. “We define disability as anything that presents a barrier to doing your work.”

When Kaltenberg contacted Easterseals, Leverenz came to his 300-acre farm. “Adding a step with a handrail allows him to get on the platform,” Leverenz said. “It’s a $200 change, but it’s profound.”

On a cold, damp morning in 2010, Kaltenberg’s hand slipped off the top rung of the  grain bin ladder, and he fell 30 feet. Crawling for 2 hours, he made it from the bin to a phone in his shop. Over the next three months, he had multiple surgeries to repair shattered ankle bones. “I had to learn to walk again,” he says.

Today Kaltenberg uses a power lift to access his grain bins and can change implements without leaving his skid loader. “Farming’s what I love,” he says. “AgrAbility’s here to help and say, ‘Hey, it’s not the end.’”